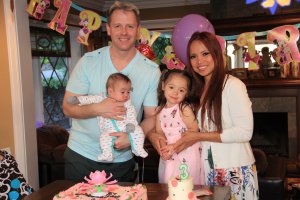 Yesterday, I shared the story of how I lifted myself out of a rough childhood in the Idaho panhandle. My discovery of weightlifting and the can-do attitude of Arnold Schwarzenegger helped me find the drive and confidence to go on to found First Prime Realty. While this story tells you how I got where I am today, it doesn’t fully explain why.

It’s my belief that everyone should have a “why”: something that drives you to succeed beyond the allure of success itself. It’s that spark that gets you up in the morning and keeps burning until the night is through. Everyone’s “why” is a little different, and sometimes it may be hard to find. I didn’t really find my “why” until three years ago, when my daughter Lily was born.
It’s not that I lacked direction before I became a father; it’s just that my goals had all been aimed at self-improvement. Growing up in a home with cardboard walls and going to school in hand-me-downs teaches you to want more out of life. For a long time, I thought that was my “why” – to do better than the hand I was dealt as a kid.

Maybe it was the “why” I needed at the time. But at a certain point, it just became succeeding for succeeding’s sake, and I didn’t find value in that. When I married Marites in 2014, the scope of my “why” expanded. I wanted to do my best to build our life together. But I still felt like a piece was missing. Then we had Lily, and everything changed.

The only way I can describe becoming a father is that it’s a total paradigm shift. Lily brought a whole new texture to life. When she came into the world on May 24, 2015, I started living and breathing for another human being. It’s a sensation that’s hard to describe unless you’ve experienced it for yourself. Two years later, on December 25, 2017, Lily’s little brother Liam came along. Now they are my “why.”
I never realized how much I was missing until I had children. Marites and I deliberately waited to have kids because we both came from family situations that were less than ideal. It was important to us that we had the means and the emotional availability to be there for our kids. We wanted to give them a better childhood than we had.

Well, I’m happy to say we are succeeding! Last month, I mentioned I wasn’t able to attend school until the third grade. Lily has already started pre-school, and we’re “starting her out” on the piano. She can’t do much more than plunk at the keys and “sing” into the microphone, but the instrument will be there for her to grow into. I’ve started learning to play myself; hopefully one day we’ll be able to perform a father-daughter duet.

For now, it’s just great getting to spend quality time with both Lily and baby Liam. As often as possible, my wife and I will pick up Lily from school, then play with both kids in the backyard together. These little moments are what get me up in the morning. The future I want for my kids is the reason I work so hard to make First Prime Realty the best it can be.
Starting a family has also led me to reconcile with my past. I had not been back to Coeur d’Alene, Idaho, in over 10 years because of the memories from my childhood. But having Lily gave me the will to go back to my roots, so she could meet her grandmother and uncles and see the mountains and lakes I used to call home.

We took a trip up this May in celebration of her third birthday, and I’m so glad we did. In fact, we may need to make another trip up in December to celebrate Liam’s birthday and let the kids play in the snow. It’s great to see home with fresh eyes.
Children teach you to step outside of yourself and see beyond your own interests. Now more than ever, I’ve learned the value of helping people. Everyone has their own “why” – their own purpose. When I get to help someone reach their goal, or at least give them the resources to start striving for it, that’s a win-win.

“Give Lathe’s office a call and they will take care of you.”

“We saw Lathe Lavada’s commercial on a Sunday morning. On thing that caught our attention was that he could buy our house! Needless to say you won’t regret it.”
-Freddie B.

“I’m even lucky to even know Lathe Lavada and I recommend anyone who needs to sell to give him a call.”

“I called Lathe Lathe because I heard he could get me a real quick sale on ah house I needed to sell quickly. He took care of me and took care of all of my needs and made sure I got every penny for the house. I recommend him to anyone who is selling a home.”

“Lathe held my hand, he took my phone calls, I love him. He is the best. He will Not do you wrong.”

“I was watching TV one day and saw Lathe Lavada and I was working with an agent who was going to make me pay money to sell the house that I recently inherited and I didn’t know what to do so I said I’ll give a call and see what I can do. I was so happy, we each got what we needed and could come out with. We were happy.”

“I feel like I got everything that I needed and I wanted and if you go with anyone else your making a mistake.”

Get Your Fair Cash Offer: Start Below!

We buy houses in ANY CONDITION in Las Vegas, NV and nationwide. There are no commissions or fees and no obligation whatsoever. Start below by giving us a bit of information about your property or call (888)387-8861...